6 Amp total output
*All USB ports have integrated SmartCharge technology so each port will detect the device being connected and give out the optimum Amp output for that device.

No. Sorry, @ThunderThighs. That is not correct. The wattage is what most informed people want to know about, and this thing says it is capable of 40 watts. That being said it could not charge my S22 Ultra at it’s top speed at 45 watts as the 6-port charger maxes out at 40 watts. If somone has a Oneplus phone capable of charging at 120 or 140 watts it would charge much slower on this charger,as it only puts out 40 watts. I love Woot and respect all the workers that help make it available to us. I don’t want to be rude but feel it is worth suggesting that you don’t give an answer if you really don’t know the answer to the question being asked.
Since you mentioned Amperage, can you tell me what the number of amps is indicative of? I ask because in all honesty I really don’t know myself. And since Amperage doesn’t seem to be indicative of the wattage I have generally found such info to be useless and sometimes misleading.

Respectfully, even Aduro’s page for the charger doesn’t give this information. I did find this on Amazon:

It seems the total power output is 40 watts. I’m not sure one would by a $16 USB charger for optimal charging speed on the newest devices. It will charge pretty much anything, I think, though the speed might be slower than a device is capable of charging.

(Please note: I don’t work for Woot, I just volunteer to help out here on the forums.)

Yes, they often don’t give important pieces of info(like wattage) when specs are not very impressive, and instead list other specs like Amperage to mislead and make it sound better than it is. Not saying that anyone here is intentionally doing that. But it is a common practice. For anyone who might not know, if they don’t list important info like that or are vague on specifics there is usually a reason. That reason is that the specs are un impressive. This chager ain’t great, but also ain’t bad. At 40 watts (I’m going to assume that it’s shared amongst the 6 ports) you could plug in 4 devices and have them all charge at nearly 10 watts each. Not great, but not bad. Probably worth what Woot is charging. Probably not until you plug 5 or 6 devices in at once that the charging speed becomes unbearably slow. As a reference, at 10 watts my roughly 5000 mah Galaxy S22 ultra would take 2 and a half to 3+ hours to charge, instead of the usual hour or hour and 15 minutes. To sum all this up, this device is probably decent for some people’s needs but through our back and forth here I think I answered my own question; it is 40 watts(as stated) but that is shared amongst however many devices you plug into it.
Furthermore, you can find inexpensive charging solutions that will charge say an S22 Ultra at it’s optimal 40-45 watts. I got a 65 watt charging cube (usb A and C ×2) with display that shows wattage on Amazon for about $35. On most sites you would be correct $16 would not be enough to get a good charging solution. But on some sites you might. And this is a deall site so I just wanted to figure out how good of a deal this is. Think I get it now. Thanks for the help ya’ll.

I found this image of the box which does show 8A. 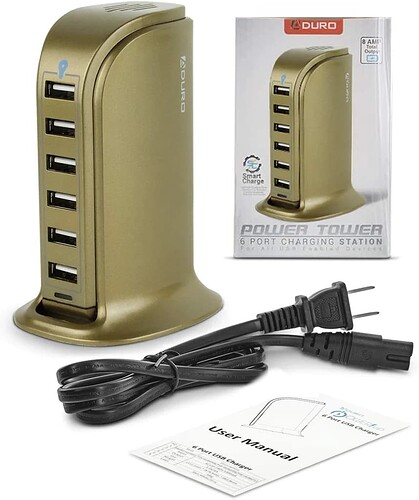 The exception to this is USB-PD (power delivery). It can negotiate higher voltages at specific higher levels, such as 9V, 15V, 20V. The reason for this is that you don’t want to be supplying more than 5A of current at any point due to physical limitations of the wire and connector (100W @ 5V would require 20A, which is completely impractical as it requires a huge wire gauge or lots of wires to divide the current across, which also increase total cable size).

Having said all of this, another point I am trying to get at is that even if you only have one device plugged into this device, you probably still aren’t going to draw the full 40W on that single port as that would require sourcing the full 8A @ 5V, even if this is complying with USB-BC (battery charging) specifications. My guess is that the max any port could deliver, regardless of what else is not plugged in, would be 1.5A (ie - 7.5W @ 5V), based on the chart below and the use of Type A connectors on the product.