Mississippi State Flag. Will you have other state flags also?

I’m from Mississippi and would love it if you’d cut your losses on that flag and toss the rest of them in the trash.

Wow selling a flag with the confederate flag on it Woot? Liked shopping with now I don’t. Good luck with your racist customers. Sickening

Last time this was up, it was ended early, so maybe that will happen again.

raciest flag why would you carry this P O S item ???

raciest flag why would you carry this P O S item ???

It’s the state flag of Mississippi. 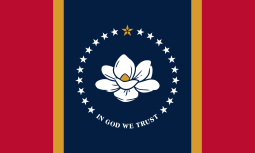 The flag of Mississippi, also known as the Mississippi flag, consists of a white magnolia blossom surrounded by 21 stars and the words 'In God We Trust' written below, all put over a blue Canadian pale with two gold borders on a red field. The topmost star is composed of a pattern of five diamonds, an Indigenous symbol; the other 20 stars are white, as Mississippi was the 20th state to join the Union. The flag was adopted on January 11, 2021. Mississippi has had three official state flags in ...

My comment was deleted? F@ck you Woot. I’ll refrain from buying in the future.

My comment was deleted? F@ck you Woot. I’ll refrain from buying in the future.

Don’t take it personal. They try keeping comments in product threads as neutral as possible while remaining on topic to the product.

Mississippi State Flag. Will you have other state flags also?