Check out the review from Cnet

Here is the product page and overview, pictures and a video from CES 2012, courtesy of engadget

Check out the OK review over at pcworlds.com

I’ve got one. Works as advertised. It was up and running within 5 minutes of taking it out of the box. However, this price seems higher than I’ve seen them elsewhere. The only downside is that the firmware has not been updated by the vendor in more than a year. Anyone know if this model supports DD-WRT?

this price seems higher than I’ve seen them elsewhere.

Can you provide specific examples of this?

Can you provide specific examples of this?

It was slightly lower on amazon just 2 minutes ago, but it reverted back to the usual price 0.o

I’ve got one. Works as advertised. It was up and running within 5 minutes of taking it out of the box. However, this price seems higher than I’ve seen them elsewhere. The only downside is that the firmware has not been updated by the vendor in more than a year. Anyone know if this model supports DD-WRT?

I do not see this Belkin Model on the list of DD-WRT supported devices.

Look’s like it’s a no go for this one.

It was slightly lower on amazon just 2 minutes ago, but it reverted back to the usual price 0.o

That’s for used, not new. 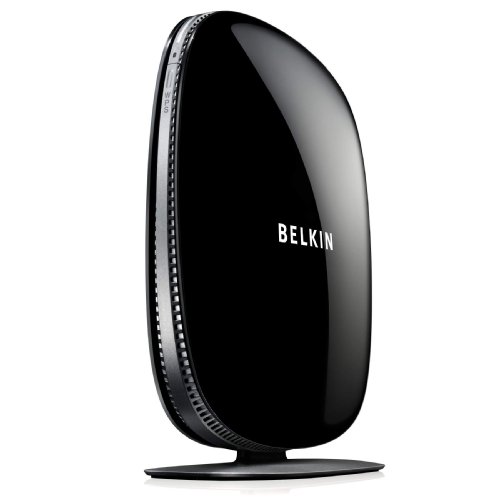 Can I replace my time Warner Cable device with this one?

I am in the market. I must say that over time, I have found Woot less and less helpful with relevant information about the stuff they sell. Perhaps this is a result of becoming a part of Amazon. Anyway…

To appropriately evaluate a router, you would want to consider the following dimensions:
a) FUTURE-PROOF: Two things to consider…

b)SPEED: This router does “upto” 450 Mbps. There are decent 300+300 routers out there also. Actual speeds depend on the number of errors and how far from the router you use your device. One also needs to know if there are two antennas, four or six, and whether the two frequency bands can be used at the same time.

c) STABLITY: This is why these things have a reset button now a days. Usually multiple devices make routers unhappy, and the more devices you have competing for attention, the less stable it is going to be. So too for higher bandwidth usage (if you watch movies on two devices together, you will likely be resetting things twice or thrice a week). Putting on something like DD-WRT or Tomato or one of the other similar options usually helps with stability, and the ability to transmit at a higher power if you choose (see next section). This router is not DD-WRT supported yet.

d) TRANSMIT POWER and “beam forming”: The antennas routers have are multi-directional (the form two big orbs of transmission around the antenna). If the device is on one side of your house, it is spending roughly half its power sending radio waves to parts of your property where you won’t use your laptop (the garden, the neighbor’s house, etc.) There are three solutions possible:

e) LOOKS: My wife certainly wants the antennae hidden. The lights being hidden is also an important feature. Not to stereotype, but wooters of the male persuasion may forget about these “features”

The above are a lot of factors for an individual to consider, so I did what I normally do - rely on what the good people at Costco (or Consumer Reports) consider to be the best price/performance/specific features trade off. There, they have a $130 router (Amped Wireless® High Power Wireless-N 600mW Gigabit Dual Band Router) and a $69 adapter… Netgear A6200 802.11ac WiFi USB Adapter. Obviously, you don’t have to buy both. And you don’t have to spring $130 for the router, other options are available at Walmart, Target, Best Buy, etc. etc.: But hopefully you can make a more informed decision now about what will work for YOU, not just whether this particular router i a good deal or not.

Mr. “Nothing is more expensive than a good deal on something I didn’t need in the first place”

Can I replace my time Warner Cable device with this one?

You probably want a router with a coaxial cable terminal and DOCSIS capability (or maybe MOCA or something else, check first with you provider).

Its running ~$136 over at the mothership and this seems like a good deal if you’re in need of a router.

I am looking for a solution to strengthen the signal on the other side of the house. Anyone know if I can do that with this router?

Belkin has is for $10 cheaper:

Not the same as this one. Belkin page one is a N600 with no usb

I have a similar router, only one usb port. It’s been a solid router. Except after I recently updated the firmware. Disable the guest access after the firmware is updated. Mine disconnected from the internet like crazy until I did that.

This is the only Router I have ever thrown away, it dropped my internet connection constantly and required a daily reboot. Belkin support was next to useless, even after I flashed the latest firmware it was till garbage. I paid 125 for this on amazon two months ago and regretted it. Got a cheap TP LINK instead and with the addition of dd-wrt turned it into a real beast…only 34.99 on Amazon. Save your money and pass in this