Comments/Discussion from a previous sale

Unfortunately this is almost always the case for everything sold by Woot! This place is a rip off in most cases…

So it would appear… tsk, tsk, tsk…

8cr13mov is just a much, much better blade steel.

There are TWO knives that appear on Amazon with very different prices.

…and the $138.99 knife (sold by a third party and fulfilled by Amazon) is described as Columbia River Knife and Tool’s 2013 Razel SS7 Chisel with Bellied Razor and Veff Serrated Blade.

Slightly different titles but they look the same to me.

Perhaps a few wires got crossed and Woot were unaware they had a listing at Amazon if it’s being sold here at $79.99 plus shipping?

Did anyone actually get the $56 one on Amazon? I tried but when I clicked to complete the order it said the item was not available even though the listing was still active.

I still bought through Woot. Even at $90 after shipping & tax it’s not a bad deal.

About the listing on Amazon:

We’re not sure what happened. The listing was far below our cost which triggered alarms in the buyers head.

She looked on the backend and the item on Amazon was linked to our internal SKU for earrings - A difference between a 755 and 775 in the number.

The Amazon listing was taken down because we’re not sure what people will get if they order it via Amazon.

We know that our listing on Woot is correct and it’s the same price we’ve sold it for recently as seen below:

We’re really sorry for the confusion. We wanted to be transparent on the issue with the Amazon listing. It was not a correct CRKT Machete listing.

We’re not sure what happened.

To quote the predator in Predators… “S**t happens!”

To quote the predator in “Predators”… “S**t happens!”

Ain’t that the truth.

To get back to the knife…
This is a beast of a knife. Kind of fits in a weird niche between a small machete, a fixed blade knife and a chisel. Hence, the name.
It definitely swings heavier than a normal blade without the overall length of an equivalent weight Bowie knife. But it doesn’t have the length and chopping leverage of a typical machete. I think I’ve found the ideal use for mine. I removed the belt clip and ran the bolts of the driver’s side door grab handle on my FJ Cruiser through holes in the sheath. Now I have a quite intimidating truck knife that’s quick to draw from an overhead position.
I received the best version of this knife: As a gift engraved with my name from a friend.
The other place I’ve considered using this is as a last resort defense weapon for wild pig hunting. You always want to carry a rifle, a sidearm and the largest knife you can when hunting 400# pigs with large pointed tusks.

I picked one up because I just got a discontinued CRKT Stubby Razel. I like it enough to try a larger one too. 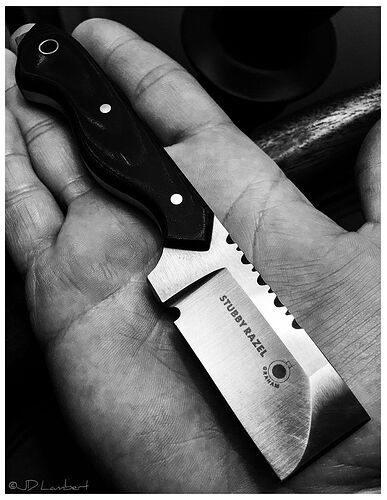