Counting Count … made from numbers :3

Equations and info to help you get around the world on your next adventure.

Science meets math when you use the Pythagorean theorem to bake some cake.

The old idea that Numbers Don’t Lie was an adage used long ago to pacify those who disagreed with facts and statistics way back in the ancient age of Truth—before 2016.

But that quaint belief just doesn’t work anymore in our Post-Truth world.

Nevertheless, most numbers still don’t lie. However, just a few make up for all the rest.

That reminds me of George Orwell’s Animal Farm’s “All animals are equal, but some animals are more equal than others.”

By corollary, I guess all numbers could lie, but some numbers lie much more frequently than others. 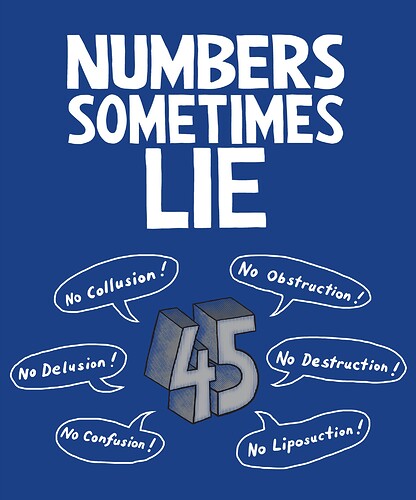 “Here I am, brain the size of a planet, and they tell me to do a song and dance routine to entertain you imbeciles… don’t ask.”

In a time when a significant number of Americans choose to believe in various thoroughly debunked conspiracy theories (from the moon landing and 9/11, to vaccines and millions of unregistered voters), we should take a moment and be thankful that—for the time being at least—there still exists a subset of the population who can think rationally and act rationally.

And we should be especially happy that the world of mathematics is not afflicted with the same kind of faulty thinking. What would we do, after all, if the meaning of numbers was conditional upon the same lack of logic that affects people. If 5 only meant 5 on Tuesdays. If Pi were sometimes negative when the moon was full. Or if the square root of 16 wanted to separate all numerators from their denominators.

So, Thank You, Numbers, for being Rational. Even you, Irrational Numbers. Thank you.

Except for the Square Root of Two. He’s clearly a lunatic. 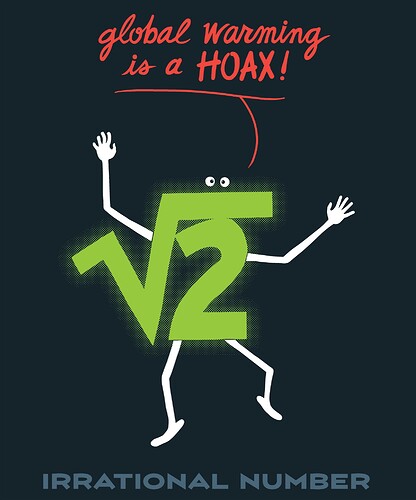 To Command means “to give an authoritative order.”
To Commend means “to praise formally or officially.”

Just think how much more pleasant those old stone tablets would have been had they been praising (and building self esteem) instead of being pushy and rudely giving orders. No one likes to be told what to do. This is 21st century America. Who are You to order us around or tell us how to act? Instead, just tell us how good we’re doing. And use funny Memes, where possible, to keep our attention. After all, I can’t even begin to tell you how much it triggers me when people tell me what to covet and what not to covet, thank you very much. 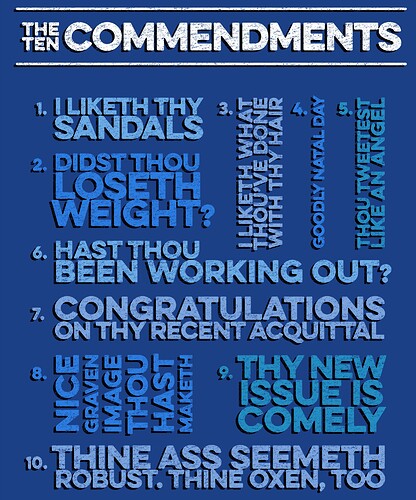 My subtle homage to the new Time Lady - the 13th Doctor! They say her shirt stripe coloring is a homage to the scarf worn by the 4th Doctor so I thought going with the style of old 70s shirts would be a double homage. Or is it a homage to a homage?

Lol… You caught me poopycakes!

Robot saying “You suck!” in binary.

I hope we can …count… on this to get printed. Looks great :^)

I’m hearing the alarm sound ringing in my head right now! Nice one!

This was all the Hubs’ idea, so all credit and blame belong with Degauss. I just drew it.