I bought the shuffle a few weeks ago and I love it. I wear it working out in the yard. All around the house when I am cleaning. It has a great sound and small enough stays out of my way doing things just clips on to my jeans belt loops. Am very happy with it.

Hate to bust Woot on this, but Apple sells 7th gen Nano refurbs for $99.

Plus you get a better selection of colors: http://store.apple.com/us/browse/home/specialdeals/ipod/ipod_nano/16gb

And Walmart has them for $89 shipped if you want the black one. Time for woot to start price matching!

And why the heck are you putting the Microsoft logo on an Apple? WOW…

And why the heck are you putting the Microsoft logo on an Apple? WOW…

It didn’t all start with iPods.

It started with PDAs.

Sorry to the fanbois out there.

It didn’t all start with iPods.

It started with PDAs.

Sorry to the fanbois out there.

That doesn’t really make sense. PDA’s like the Palm Pilot and its offshoots are/were information managers, not music players. …

I agree - PDA’s don’t count. Of course iPods weren’t first either. I bought this: 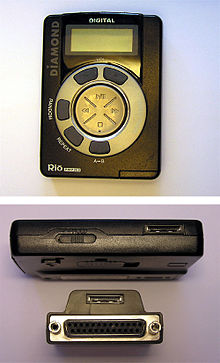 The Rio PMP300 is one of the first portable consumer MP3 digital audio players, and the first commercially successful one. Produced by Diamond Multimedia, it was introduced September 15, 1998 as the first in the "Rio" series of digital audio players, and it shipped later that year. Roughly the dimensions of a deck of cards (3.5 inches by 2.5 inches and 0.625 inches thick), the Rio is black, and features an LCD screen and a circular pad with control buttons. The device has controls for skipping t...

5 years before the first iPod.

Even though I have an iPhone, I do love my iPod Classic, which is 160GB and can hold almost all of my music and videos, and my 6th Gen Nano, which is small like a shuffle and fits comfortably on my wrist as a watch or on an armband while I work out. I do like the new 7th gen Nanos since they have built-in Bluetooth, but the size of the 6th gen is more appealing to me. I have to use a Bluetooth adapter on my 6th Gen in order to use it with my Jaybird headphones. The other cool thing about the Nano is that it has an FM receiver. I have an FM transmitter hooked up to my TV, so I can stream the sound through my Nano early in the morning while I’m on the treadmill or elliptical and not wake my husband watching TV.