Much you have to learn

*pyramid structure also a plus

Would you guys (literally, ya’ll men) out there would wear this shirt?

I think I would…

This must be what happens when unstealthiest ninja adopts a litter of kittens.

Unstealthy they may be but black belts in cuteness ;3

Well hell, why do I have to be flat broke right now? I neeeed this shirt to go with all my Unstealthiest Ninja shirts. off to dig for change in the couches

Empirical evidence from The Reckoning suggests the following two laws of nature:

Conclusion: this shirt will be maximally irresistible.

I can’t believe they took the class picture the day I was out sick.

Everyone stop talking about CowboyDann I think He’s back. 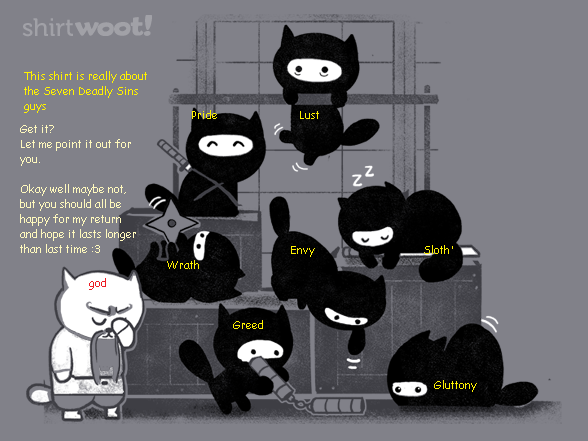 I provided this animated representation of your minds right now

And are designed to…

It is an adorable shirt!!

[QUOTE=CowboyDann, post:14, topic:368052]
Everyone stop talking about CowboyDann I think He’s back.

Nice… Though gluttony and lust should switch. The glutton can’t get over the bar and the lustful one is after the sti
ck…

Nice… Though gluttony and lust should switch. The glutton can’t get over the bar and the lustful one is after the sti
ck…

I had that first, but then I decided to switch it at the last second under the premise that lust was balancing on that pole, saw pride’s charisma and fell in lust with him and slipped off the pole. Gluttony has a bigger butt anyways.

Also, I’d be ~a little~ surprised if this is true because this comes from the “talking out of your ass” all my experiences that english arts and film classes gave me

“Design” and “pray?” Proofreader on break, came back to find sentance already completed? Wootwriting is usually technically impeccable, so, cad that I am, I must pounce on these errors and shout “Aha, I say! Aha!”
There. I feel better now. Thanks.

Thank you. My 12-year-old daughter has had a fascination for ninja cats ever since she taught her (always growing) troupe of stuffed toy ones to do ninja moves. (They take classes, pass practical tests, etc.) She gets very detailed about what they’ve learned, and has taken to drawing them more than playing with them now that she’s gotten older. It’s always fun to find something that appeals to her love of cats, but to find ninja cats is a total bonus!

I’m not really into cats and I’m totally not into ninjas, but GOSH DARN IT, this is so cute and awesome it’s practically irresistible! Great design, Anna-Maria! I predict major sales numbers.

said by a person with a few cat shirts but NO ninjas, not even unstealthy ones