If its the same as the HD20, its a great projector. And I’m pretty sure its the same. Maybe 9x better?

Does it come with something to project onto?

1.07 Billion colors? I can already taste the rainbow!

Only 30 days on the bulb? Not confident in their own product are they?

Price looks good, amazon has it for 2x the price http://www.amazon.com/Optoma-HD180-Definition-Theater-Projector/dp/B003Y06L1A

AVS Forum has a nice discussion about this projector which is apparently a stripped down (not much) version of the Optoma HD20 widely available at Costco. Users say quiet fan and no rainbow artifacts among other praise.

It’s worth noting that there is no audio support at all on this projector. Make sure you have your own audio setup before replacing your TV with it.

I can’t find any expert reviews for this model. Here are some for a couple of other models, just to give some idea about the company:

They may not have a review of the HD180 at Projector Central, but you can input the model into this Projection Calculator and answer questions such as “Will your projector fit the available space? What about your screen? What about seating and room lighting?”

I was in a Best Buy looking at projectors, and a sales rep showed me one of those newfangled high gain screens. First he showed me how the picture was all washed out even in minimal light, using a conventional screen. Then he switched to the high gain screen, and it was amazing.

The results seemed like magic, but I saw them with my own eyes. The salesman explained that the gain made it higher than 1.0. I asked him if he meant that the screen was displaying more light than was being projected, and if so, how was that possible? He said yes, and it did so by “gathering reflected light from the cone.”

Everything I know about optics made this sound like snake oil, except (repeating myself) - I saw it with my own eyes.

And as you would imagine, they’re not cheap. Portable ones are more affordable though… 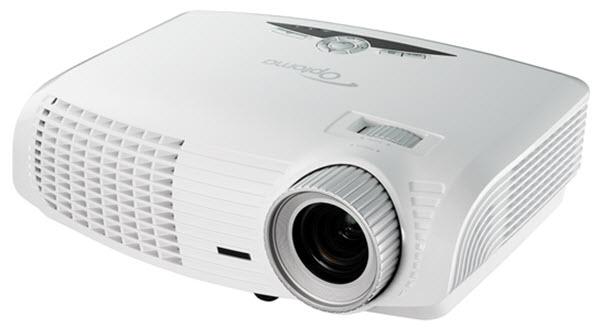 Awesome price. Bought this last Christmas (for about a grand) instead of purchasing a $500-600 replacement bulb for my InFocus. It’s very lightweight, cools down in about 15 seconds, and presents a lovely HD picture.

Its Christmas night and I’m too lazy to research this myself: how do the Lumens (brightness) and noise level stack up to competition? Enquiring minds want to know.

Does this mean my View Master is obsolete?

Is this supposed to be better than my “World’s Crappiest Projector”? Cause it’s one fine machine. If anyone who buys todays woot would like to trade evenly for my fine projector let me know.