I have this product right here. It lists hemp powder as the first ingredient and hemp oil further down. It sent my year old pup into orbit. He was wild and crazy all night with two heart shaped chews. My calm sixteen year old dog had no effect. Tried again next day. Pup went crazy again.

This was a replacement for the first product which had same ingredients minus hemp. And it calmed him so we could all. He’s a rescue who was abused and is very active now that he’s not starved and on a chain. The other product isn’t sold here

So, I need a complete list of Petaxin ingredients. The one I got from Amazon has hemp. Can I get a pic of ingredients off what woot is selling? 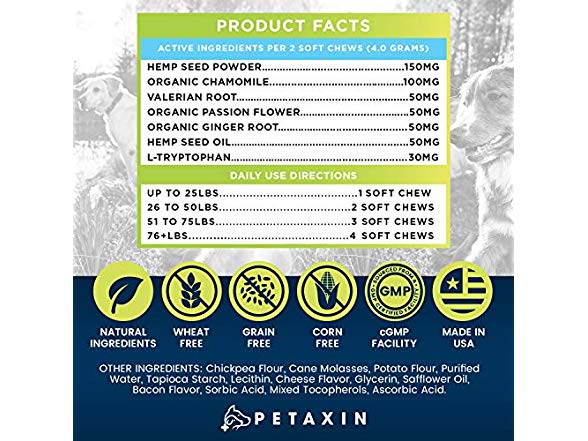 Watching this thread cuz I have a

that has “anxiety”. We’ve tried L-theanine per our trainer, but I need to add something else & really don’t want to give him traditional meds if I don’t need to.

Thanks. I am vision impaired and thought I looked at each pic carefully. Mine says Calming +. Pretty desperate to help this pup. My vet suggested two things I am having trouble finding.

Daughter initially bought July 3rd in Atlanta, but I am on near the Ga/Sc border on the coast. Vet suggested drops that humans and pets can use. Should arrive tomorrow from Amazon. All herbal. Also suggested something with Hound in the name. This dog had to have his leg removed from abuse and nearly died from anesthesia. So it’s no surprise that hemp affected him.

I will report on these herbal formulas for those who are interested. In 35 years of rescuing dogs, this is the hardest case I’ve had, which says a lot.

Good luck with that pup. And thank you for all you do for them!