Is the tablet’s screen linked to the iPod/phone’s for control purposes?

Here are links to reviews:

And the manual and specs:

The manual at Phillips as a PDF file.

Not a bad tablet per the reviews on Cnet, and the retail is around $180.

Does this work with a Zune as well? it just seems like everything is all i(something) and nothing is made for the zune unless u buy it directly off their site or in stores where it looks cheap

Can you play videos from the SD card slot?

Is the DVD player region locked? 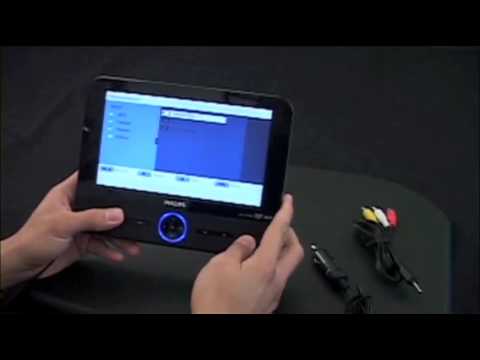 looks really nice and I think philips makes nice stuff that plays divx very well. Too bad I’m not a fan of the open face design, I much prefer the clamshell. Does it at least come with a sleeve or something?

It does come with a pouch, nice.

Does this work with a Zune as well? it just seems like everything is all i(something) and nothing is made for the zune unless u buy it directly off their site or in stores where it looks cheap

From www.productwiki.com this is a quote from them:

The Philips DCP851/37 is a portable DVD player with an extra-large 8.5” widescreen TFT LCD display. It plays CDs and DVDs with a variety of media formats, including JPEG images, MP3 audio files, and VCD, DivX, and MPEG-4 videos. Plus, the Philips DCP851/37 includes a dock for connecting to & charging an iPod. Additional features of the Philips DCP851/37 player include a slot for SD/MMC cards, a remote control for convenient navigation, two headphone jacks for private listening, and a cigarette outlet adapter (12vDC) for hooking the unit up directly to an automobile. The Philips DCP851/37 retails in black for $129.99 and comes with a 1 year limited warranty."

It shows a remote in the picture but it’s not listed in the contents. Does it come with the remote? And if it does can we get a close up picture of it?

Serious question: is it iPHONE compatible?

Self answered: sort of.

3G, 3Gs won’t charge battery and has to be in Airplane Mode.

Bummer. I just trans-graded from 2G to 3Gs (hoping the 4G doesn’t come out next week!

Does anyone know how long a 3Gs will run in Airplane Mode but playing videos without a charger on it? Maybe you can turn off the iPhone screen too and save a little more juice? Basically, is this good for a transcontinental flight, or only intrastate?

I have a Philips MP3 player (which I absolutely love), I’m wondering if this is compatible?? If so, it’d be perfect for car trips!!

I have a 5th Gen iPod with video from early 2006. From the specs listed, I think it says its not compatible. Or am I wrong?