Let’s learn about the warranty

Their optics used to be made in Japan. Now they are Chinese made. Pass.

Ouch. That review was brutal. I think I’ll pass on these. Thanks for the link.

That TTAG review was brutal, I agree. That said, there’s a fairly extensive thread about this scope at 300blktalk:
http://www.300blktalk.com/forum/viewtopic.php?f=151&t=82218

No one there is complaining about glass problems. So, I am inclined to believe that TTAG got a bad one (as happens with Chinese scopes). I always take user reviews with a grain of salt, but I think folks would notice if they had the focus problems that TTAG did.

MANUFACTURER RESPONSE TO THE REVIEW BY TTAG:

Nick, your review is possibly the worst review I have ever read about our RR-Evolution-BLK. I am disappointed that you didn’t feel the necessity to consult with me with any issues prior to bashing the optic on the public forum. Given the chance, I would have happily tried to rectify any issues that you might possibly have had just as I was happy to oblige your request to review the optic in the first place.

That being said, PFI is dedicated to building quality optics…period…regardless of where it is made. Customer satisfaction is our number one goal, and I personally answer almost 90% of all inquiries and give personal support for almost all technical questions or issues whether it be a soldier in Afghanistan or a novice shooter somewhere in the midwest. My dedication to this company goes far beyond any compensation. I truly believe that our reticle concepts help shooters engage targets much faster and more precise by giving them the ability to acquire, range, and impact a target without the need to manually adjust or make calculations. In my eyes, if a novice shooter can pick up a rifle and smack a target 600 yards out without any experience with the weapon system, we are doing something right. Then, imagine that capability in the hands of a soldier or a LEO who must use that system in the face of not just a threat but multiple threats. Our reticle systems have proven themselves time and time again in combat especially with our RR-900 series that was designed for the Army’s M14 EBR program,

As for the RR-Evolution-BLK, I have never been told anything but that the glass clarity is impeccable which is to be expected since it is BAK-7 glass. Further, I have never seen the illumination problem that you have stated. I don’t know what brightness setting that you have it on, but here is how my reticle looks at the highest brightness setting: 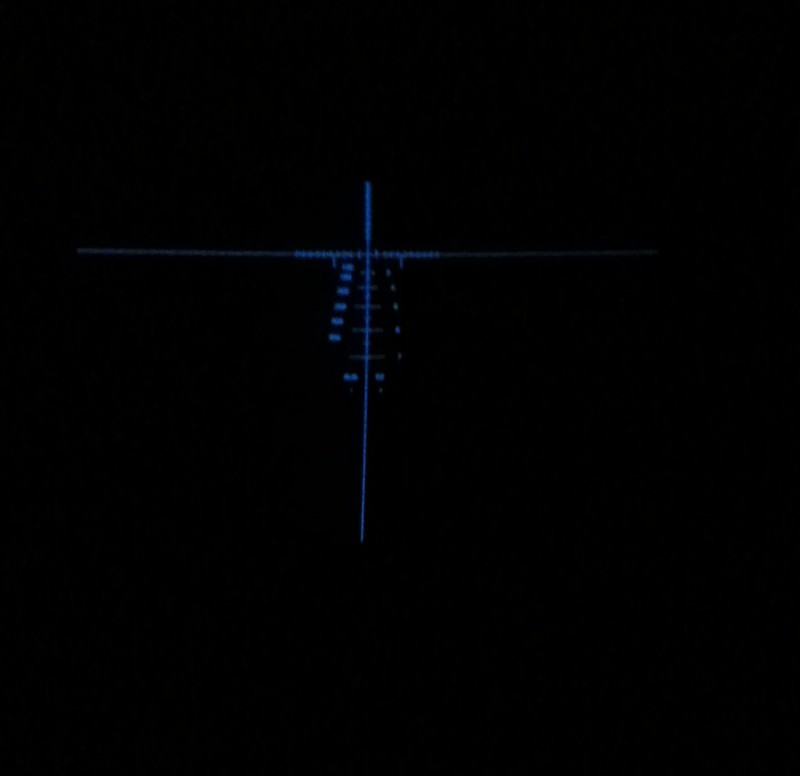 As you can see from the pics in the link, nothing is washed out whether in complete darkness or in low light conditions. These pictures were taken just now with my phone camera. The reason that we spec’d 3 brightness settings was to give the shooter the ability to manage the brightness especially over time where a degrading battery will lessen its intensity inherently. Generally, with a new battery, the 1st brightness setting is all that will be needed, but as time goes on, a higher setting can be used to mitigate any lost brightness. It might just be a battery issue. If so, just leave it on for a few hours, and any washout will be gone. Any notion that the scope produces artificial light to a game warden is preposterous. I am from TX, and I have hunted with game wardens. That comment was absolutely uncalled for.

As for clarity beyond 250 yards, I am flaberghasted at your comments. There is a fine focus for a reason and a parallax setting is absolutely unnecessary for a 1.25-4x. The preset parallax setting has been designed to handle both close range and long range clarity. It is a compromise and balance that certainly does not affect the shooter’s ability to impact a target. Recently, I was conducting military tests with the US Optics version of the BLK scope. The soldiers testing the scope were so excited that while they were waiting their turn to shoot with the US Optics version, they picked up the rifle with the civilian RR-Evolution-BLK scope. With supersonic loads ranging from 110gr to 125 gr, they were impacting targets out to 600 yards. With subsonic loads, they were impacting targets to 300. A civilian contractor conducting a non-firearm test with another group stopped by. This gentleman had NEVER shot a firearm before. With less than 5 minutes of instruction, he impacted the SAME targets as the trained shooters did with less than 1 mag and in under 3 minutes. Remember, the trained shooters saw this optic system for the first time that day. The novice shooter did as well, but before that day, never pulled a trigger in his life! So, if a first time shooter can impact a 600 yard target, then the comment saying that it is impossible to use it at 500 yards is quite puzzling. As an even further note, the fastest time to impact 5 targets with our scope vs the plethora of other scopes was 52.83 seconds. The longest time was 103 seconds with a military issued optic. The absolute fastest time on those same targets was 35 seconds with our RR-CQLR-1 on an M4.

It might be possible that Nick got a lemon. It happens but rarely. Nick, please do send the optic back, and I will personally take a look at it. If there is an issue with that optic, I will gladly send another for further testing and review if you would like to test it. When I get back from SHOT, I will add more pictures to show clarity beyond 250 yards. I have never had an issue seeing both the image and reticle clearly at any distance.

I will be shooting a video to show how this scope performs as well. The video will not only show impacts at 100 yards but also on the speed to engage multiple targets at various distances.

Now, I am going to continue preparing for SHOT. Anyone with questions can post it to this page or feel free to email or call me directly. Please leave a message if I do not answer. I will return your call. It would be my pleasure to assist you. Godspeed and God bless.

I made three new years resolutions, one of which is to refrain from buying Chinese manufactured products if an alternative American product can be had.

I made three new years resolutions, one of which is to refrain from buying Chinese manufactured products if an alternative American product can be had.

This thread talks rather highly of this scope series.

PFI is still on of the best scopes for the money. I agree that they cheapened these up from their previous RR6 and RR8 series scopes, but i have one of these already and it works great. Solid price as well, dealer cost is $258.

This thread talks rather highly of this scope series.

Those are the Japanese-made scopes, which I think everyone agrees are some of the best FFP scopes out there. I have some of their Japanese-made reflex sights, and I have no complaints (I also run ACOGs and Eotechs, to put this in perspective).

I’m impressed with Rich’s response, so I’ll grab one and give it a try. Need something for my SKS bullpup build anyways…

In regards to clarity, here is a quick photo I snapped with my phone. 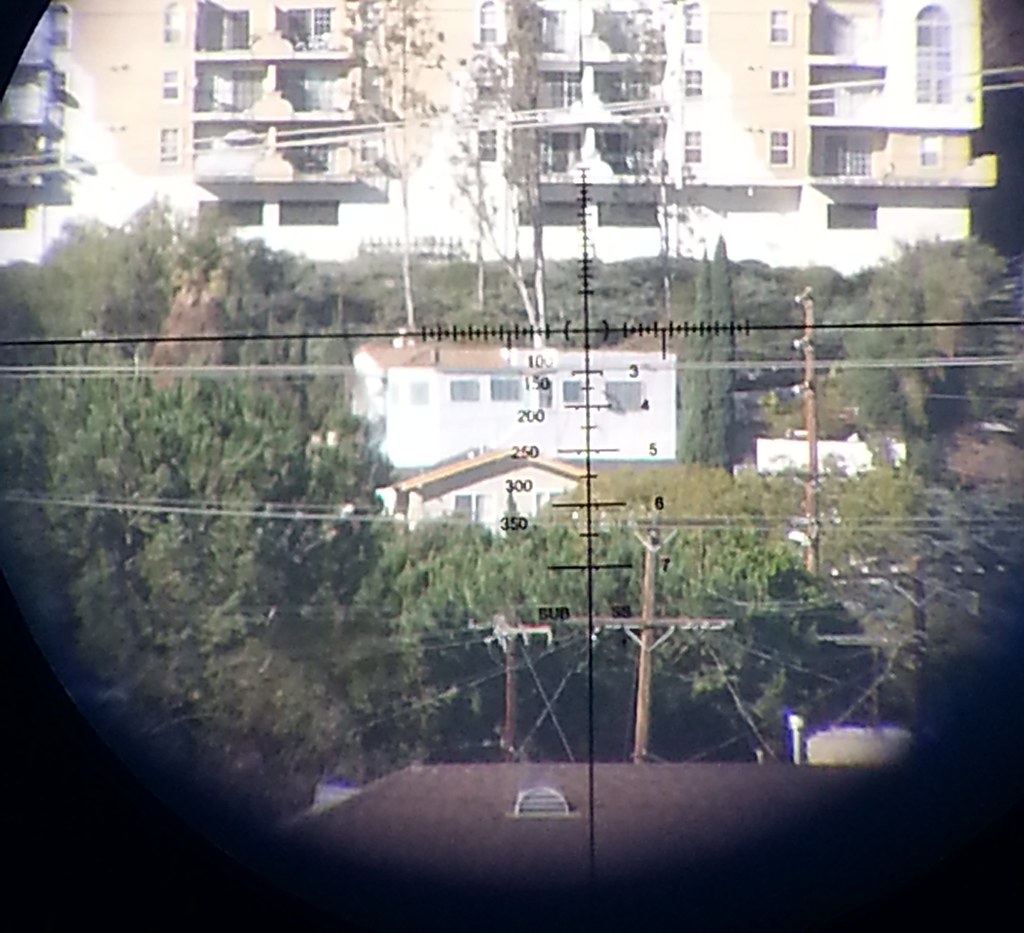 The building in the background at the top is just short of 500 yards from me. The clarity is outstanding as designed and spec’d. I am looking forward to seeing the scope that Nick actually has. Again, please feel free to field me any questions.

Those are the Japanese-made scopes, which I think everyone agrees are some of the best FFP scopes out there. I have some of their Japanese-made reflex sights, and I have no complaints (I also run ACOGs and Eotechs, to put this in perspective).

I’m impressed with Rich’s response, so I’ll grab one and give it a try. Need something for my SKS bullpup build anyways…

I only buy quality gun parts…

I only buy quality gun parts…

I only buy quality vehicles.’

Guess there are snobs and brand whores in the gun crowd too. Too bad you won’t own a Zeiss. btw, PFI’s older stuff had a reputation for being pretty solid.