This specific speaker table provides me with an interesting and useful solution to a problem.

The table will be used by a person who can’t quite hear their tv across the room. And it is a perfect piece of general furniture for the situation.

Really ? Looks like something put together by a 12 year old in shop class,way ugly !

looks cheap, but be a great table for a blue tooth record player

This is how I imagine a Twonky would look.

That has got to be the ugliest piece of “furniture” I have seen in quite a while.

Oh, gosh! I remember that TV episode. It was kooky comedy. I agree, it looks mid-century modern, like the Twonky TV. 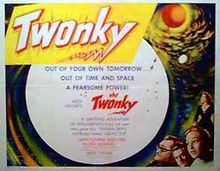 The Twonky is a 1953 independently made American black-and-white science fiction/comedy film, produced by A.D. Nast, Jr., Arch Oboler, and Sidney Pink, written and directed by Arch Oboler, and starring Hans Conried, Gloria Blondell, Billy Lynn, and Edwin Max. The film was distributed by United Artists. After seeing his wife (Janet Warren) off on her trip, Kerry West (Hans Conried), a philosophy teacher at a small-town college goes inside his home to contemplate his new purchase: a television se...

Oh, gosh! I remember that TV episode. It was kooky comedy. I agree, it looks mid-century modern, like the Twonky TV.

Actually I was thinking of the story, not the film, but either works.