Not unless you’ve got a picatinny rail on the fore-end.

I’d also be moderately surprised if these could really hold up to 12ga recoil. Firefield is mostly cheap imported optics, which don’t have much of a general reputation for durability.

Caliber ratings would be definitely be useful information.

You’ll need something like this:
http://www.amazon.com/Sun-Optics-USA-Shotgun-Mossberg/dp/B001UK5AXG/ref=sr_1_3?ie=UTF8&qid=1362671492&sr=8-3&keywords=mossberg+saddle. I wouldn’t bet that any of these would withstand 12 gauge recoil though.

I’ve purchased low-end optics before. Please understand that you get what you pay for (for what you pay?). Anyway, cheap optics are fragile and their lasers and dots are dim to invisible in bright environments.

Darn, I was hoping for more Pride Fowler stuff.

For $30 Nothing makes your zombie shotgun look cooler to your buddies than a Reflex site. The Cool to $$$ Ratio is way high.

For $30 Nothing makes your zombie shotgun look cooler to your buddies than a Reflex site. The Cool to $$$ Ratio is way high. 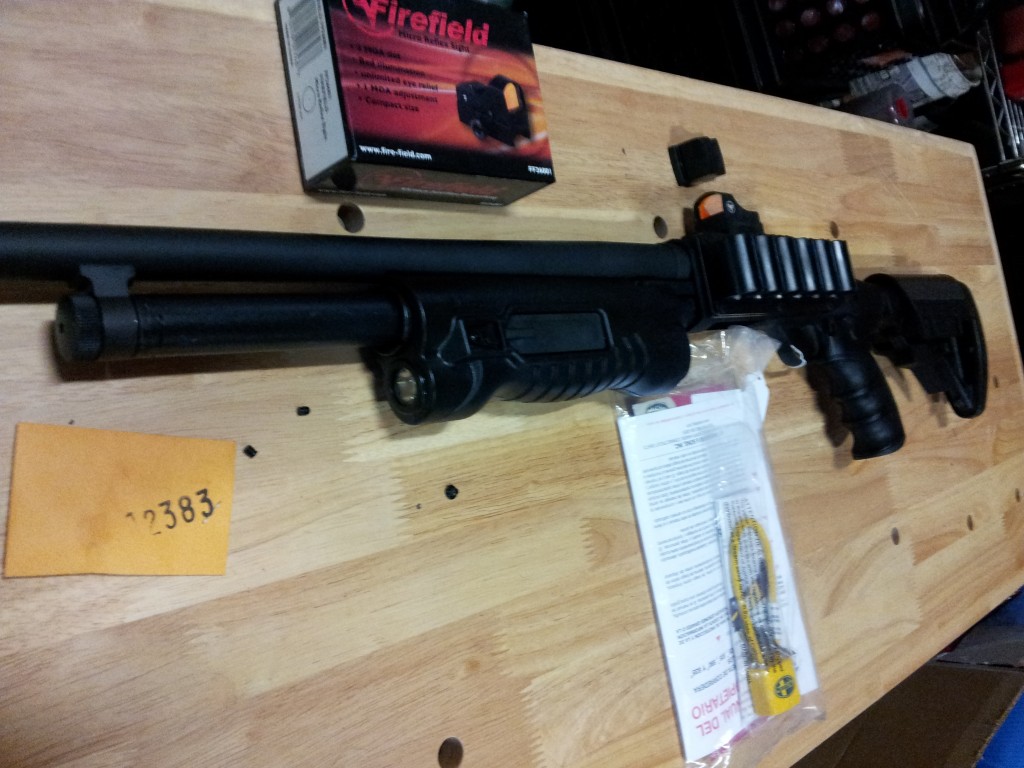 Wow, never knew woot did gun related items! Not this time but next time around i am all over a few of these, cheap enough to at least give a try to, have to check out reviews.

I’m in for too many! I ordered 4 things on this page!

No buyer’s remorse intended but one thing to just check out before buying is your states hunting laws. Here in ID it’s illegal to hunt with green or red crosshairs. But target shooting you’re good to go with color.

That’s because RED + GREEN = Christmas and cross + hares = Easter so

and it’s illegal to hunt Jesus.

I notice that The Mothership has this for the same price http://www.amazon.com/Firefield-Tactical-12-40-Riflescope/dp/B004QAIUAC, albeit higher shipping. But, seriously, where are the DEALS?

Oh, and BARREL MOUNT laser? What idiot came up with that idea? You want your barrel free floating, not weighted down with some aftermarket piece of junk. I was almost interested in what looked like a scope mounted laser, but not barrel mount.

Bad woot! Bad woot! Go to your doghouse for the day, and come up with some good stuff for us tomorrow.

Actually, the $15 barrel-mounted laser sight should work, at least once. As has been mentioned, any of these may not stand up to the recoil for long, and all of the other options require rails (including both of the red-dot sights).

Keep in mind that lasers, red-dot sights (& green-dot), and scopes are all functionally different types of sights. Red-dot sights do not project a laser, they function similarly to a scope but use a single lighted dot in place of the traditional crosshair reticle. A reflex sight is the same, but allows keeping both eyes open.

Agreeing with warpirate, the value there is in coolness for cheap. Not for anything serious.

Darn, I was hoping for more Pride Fowler stuff.

Me, too. I’ve been VERY happy with the SOPS and Action-4 sights I got off Woot.

Here in ID it’s illegal to hunt with green or red crosshairs.

Hopefully your shooting is more accurate than your legal advice.

In any hunt, including any-weapon seasons, it is unlawful to pursue or kill big game animals:
…
• With any electronic device attached to, or incorporated on, the firearm or scope; except scopes containing battery powered or tritium lighted reticles are allowed.

Caliber ratings would be definitely be useful information.

these are garbage and will be garbage on anything they’re mounted to, regardless of caliber.

I don’t understand why anyone would need/want a laser sight on a shotgun.

Up to 300 yards visibility at night…

I don’t understand why anyone would need/want a laser sight on a shotgun.

I had pistol grip mossberg for the home this would have been perfect for, especially when aiming from the hip at night.

Likewise the pistol laser…gotta have windage and elevation if you kinda want to use it to aim by, though stating its 300 yards range is likely a reference to its illumination ability, not your ability to place shots at that range with a hand caliber pistol.

In for one of the latter, I think.