There is new DVR software in the works for HDHomeRun PRIME: 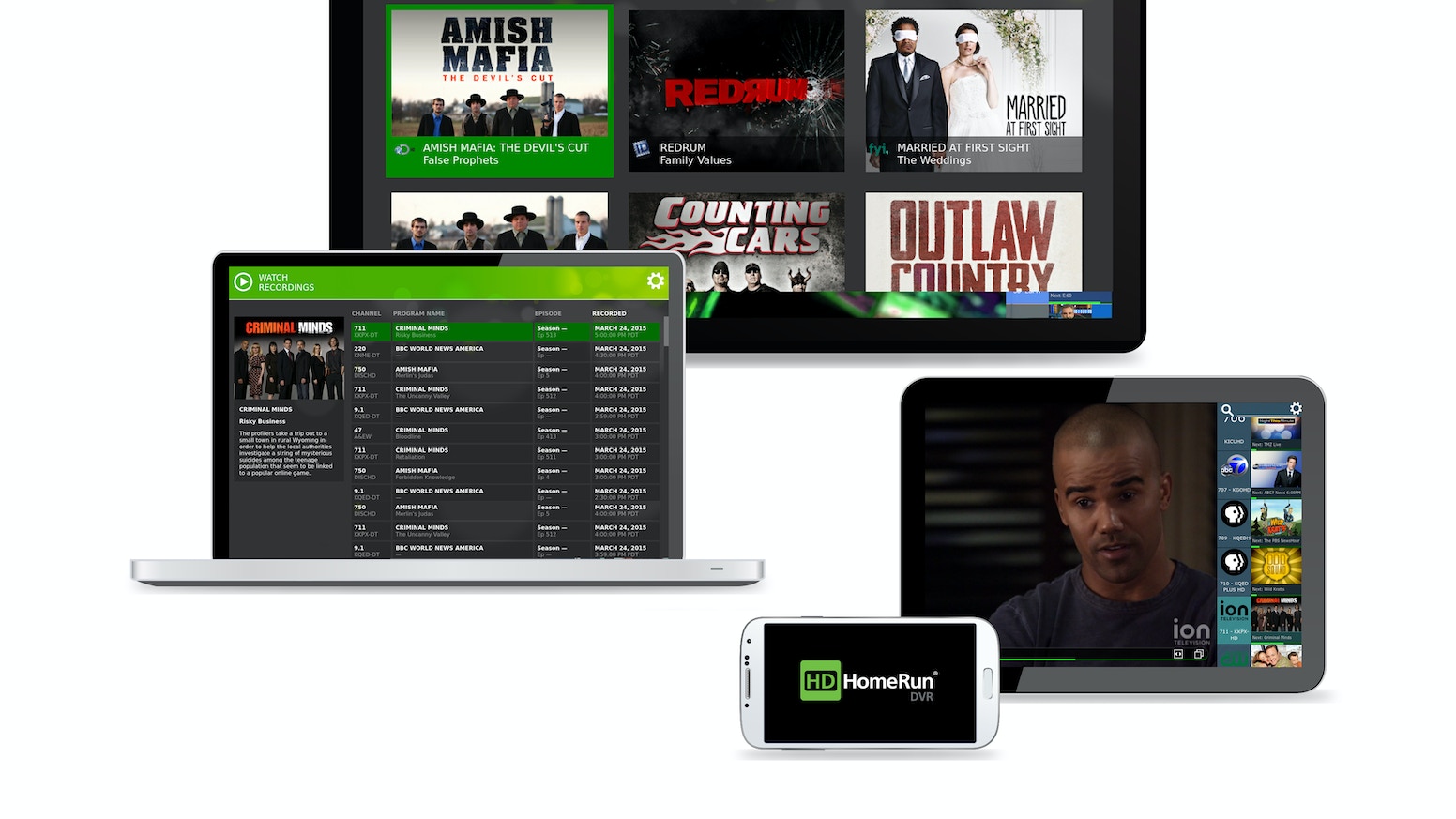 The ultimate DVR experience. A simple & cost effective way to record and watch TV on media devices around your home. TV on your terms.

Good Reviews over at B&H Photo

Got a question? Check out the silicondust.com forums

Is there a remote included? I don’t see that mentioned.

Anyone have experience with this and Fios (preferably in DFW), I see it listed as a compatible company, but would like reassurances before I bite. I don’t have HD because I refused to pay the additional $20 HD box rental fee they charge, this would be perfect.

Is there a remote included?..

There is no remote, but that is because this is a network tuner and not the actual viewing device. TV is actually viewed via a PC, Laptop, tablet, etc., so that device is the one that would need a remote.

For example, I have two of these on my network. I access them with two PC’s running Windows Media Center and both computers have an IR receiver, so I am able to use a normal Logitech Harmony remote to control them.

I feel like I should note a couple of things for clarification and to provide some more information. The two SiliconDust tuners give me 6 simultaneous channel streams total, 3 from each, even though my Cable company said that the Cablecard that you get from them to use in these tuners would only support 2 per card.

My two PCs, Intel NUC’s which work fantastically for this, are in two different areas of my house and are set up to grab any of the 6 streams over the network, whichever ones are not already in use by another device. I run Windows Media Center because to my knowledge that is the only software that allows you to view Encrypted channels, which for my cable provider is basically all non-broadcast HD.

Windows Media Center also allows me to record to either PC, but recordings must be played back on the computer that recorded them due to a ‘Copy Once’ restriction my Cable company has in place. I have a 2TB hard drive in each PC to store recordings, and that gives me over 100 hours of HD DVR space on each system.

I also use tablets and a laptop to occasionally watch non-HD channels wirelessly, most often from my garage or pool, and that requires the use of an app or other software for connecting to and displaying the channel stream on the device.

You better be a guru or at least top geek or your in for a big disappointment. Hard to setup and is not compatible with many Ipads, laptops, or notebooks. Better have the highest wifi signal as well. Thumbs down if you know whats good for you!

Is there a remote included? I don’t see that mentioned.

Anyone have experience with this and Fios (preferably in DFW), I see it listed as a compatible company, but would like reassurances before I bite. I don’t have HD because I refused to pay the additional $20 HD box rental fee they charge, this would be perfect.

I have had my for about 9 months on Fios in DFW. Works great. Getting a cable card from Verizon without paying a $20 shipping charge was a bit harder. You can’t get the premium channels (like HBO, Showtime…) with this though. HBO is free right now, but can’t watch through the prime. I put HBO Go on my Roku, and it validated with my Verizon credentials though.

Right now Verizon doesn’t flag anything as copy once, could change when Frontier takes over though.

I use a program called HDHRFling to watch cable on my Roku’s.

You better be a guru or at least top geek or your in for a big disappointment. Hard to setup and is not compatible with many Ipads, laptops, or notebooks. Better have the highest wifi signal as well. Thumbs down if you know whats good for you!

This thing is a cake to set up. Probably about as easy as a network printer. Sure beats the Ceton InfiniTV card that I ended up selling to some other sucker before getting one of these.

Plug into cable, network, power. Insert Cable CARD. Tune in via computer running WMC, Kodi, MythTV, even VLC. Provision CARD with cable Co. Sit back and enjoy paying less per month. I do have to admit, if you’re running it over WiFi to tablets, smartphones, you better have a decent wifi signal of at least 802.11g.

Also, those of us that do run Kodi, there is a nice addon now available for live TV with paid guide information.

Got this on a previous sale, then spent months in a war of attrition with Comcast who gave me a card they could/would not configure, giving a new excuse every time I spent hours on the phone with them. Looking for an OTA version of this to come up on woot now.

You can’t get the premium channels (like HBO, Showtime…) with this though.

You can indeed get premium channels with HD Homerun Prime with Windows Media Center. I am watching HBO right now. The cable company must send the authorization signal to the unit, and I suspect they just didn’t do that for the free HBO trial.

You cannot get Pay-per-view channels however.

I have three of these units that give me 9 channels of TV on various computers throughout my house.

If you have questions about media center or the HD Homerun Prime, these folks are very helpful
http://www.thegreenbutton.tv/forums/

I have been eyeing the HDHomeRun Plus in the past week to start replacing a computer with a built in tv tuner that died. Would those with experience with this product recommend I jump on this sale? I have Windows Media Center with external hard drives I use for tons of space. I subscribe to Time Warner cable and do have a Showtime subscription but hadn’t cared about getting it on the dvr. Can I use this unit without getting a cablecard and just watch everything I was getting on the old system? Will using any of these units really slow down the wifi my husband also regularly uses for video games in another room? This would be an awesome price so any advice you folks have would be much appreciated!

Can I purchase one of these and use it to send signal to another tv in my house? I have Dish and it’s hooked up to my main tv in my living room. I’d like to find some way to send that signal to the tv in my basement which is NOT a smart tv but I do have a chromecast.

So I guess my question is - can this be used just to stream whatever signal is on my main tv out to a web browser so that I can then cast it from a laptop in my basement to my main tv?

Or is there another setup that this can be used to get my desired outcome? Thanks! --CK

I have the Ceton Infinitv 4 tuners and used Microsoft Media Center guide. TW Guide not available. Nor are on demand but you can use the My Time Warner and other apps or websites to access On Demand.

Considering adding this for networked tablets/notebooks.

You use this with Windows Media center which has a much better guide than what the cable company gives you. It also works with Kodi, though you dont get protected content with that.

Yes, you lose the guide, as well as access to any OnDemand. HOWEVER if you use Windows Media Center, that has an included guide. Other DVR solutions such as MythTV and Kodi, have to sign up for a separate service such as Schedules Direct for the feed data to the EPG.

Just wanted to add my experience with this tuner. I picked one up a few years ago on another woot! deal and I love it!

I have mine set up with Time Warner Cable in the DFW area. An old PC sits in a corner running Windows Media Center [Win7] and I view everything on an Xbox360 connected as a media center extender.

This setup works fantastically. I’m generally not a huge fan of Microsoft but the Media Center/Extender functionality is one of the best things they’ve ever done.

I’m able to watch/pause live TV, including premiums and easily record/view [live] 3 channels - or I can record 3 channels and watch a previous recording.

The only thing it does NOT do is OTA, and On Demand. Between Netflix, Amazon Prime and HBO Go [all also run through the Xbox360] I don’t really miss the On Demand at all. And of course the OTA channels are mostly carried by TWC anyway.

For me this is all great. I get a significantly better guide and PVR functionality/experience than the crappy TWC box and the cable card only costs me $2.50/mo to rent instead of $20/mo for the box.

So if you have an Xbox360 and a spare Win7 Premium/Ultimate PC (I don’t think Win7 Home has Media Center?] , this is a great setup and I highly recommend it.

I use Windows 7 Media Center Guide and an enhancement program called “My Channel Logos” available at:

It lets me have 10 channels displayed per page instead of 3 from the cable company DVR and I have logos for each channel. It also lets me choose the time display. The cable company shows 1.5 hours per screen but I have mine set to show 3 hours per screen, so I don’t need to scroll as much to see what is on and what is coming up in the next few hours.

For other users of Win 7 WMC, there is a useful site with tweeks at:

Keep in mind that it hasn’t been updated for a while, but still a lot of useful info.