I got all excited until I realized it wasn’t from the actual Italy.

I don’t suppose anyone here viewing this tonight has had this before, have they?

Hmmmz - winery established 1997, but the bottling comes from grapes 1990 through 1994? Or typo?
What happened in the magic years inbetween? very confusing. so another winery started the winemaking process?

About the same price here? http://www.noevalleywinemerchants.com/luvaggio-di-giacomo-il-ponte-fra-de-terre-vin-santo-375ml-half-bottle/
(though it says 375ml here, it sounds very similar)

I found this text hinting to a restaurant price of $45 and thus a purchase / retail price of less than $20.
http://www.thekitchenrestaurant.com/menus/kitchen_february_wine.html

Made from white Trebbiano grapes that were allowed to raisin on the vine, the Uvaggio Vin Santo, though fairly unique in this country, is a traditional dessert wine in Tuscany. Served cellar temperature, this Vin Santo has a sherry-like nose along with roasted almonds and raisins. It also has a supple mouth feel, pepper spice, honey-roasted nuts, raisins, smoke and caramel with a dry finish.

Some tasting notes from an older article:
http://www.winecountry.it/regions/veneto/articles.php?CurrentArticleId=122

More info about the winemaker 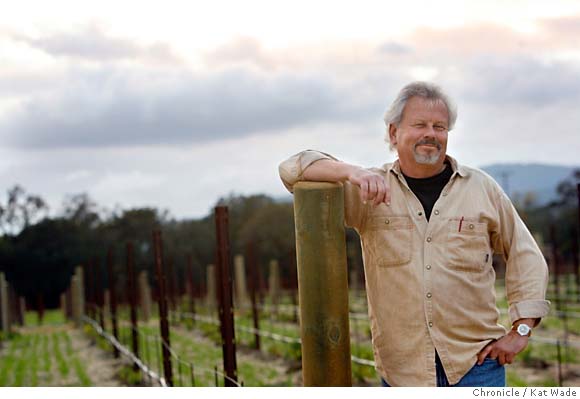 Moore, 55, had left a job as an assistant winemaker at Bonny Doon Vineyard nearly a year before to concentrate on his own label and passion, L'Uvaggio di Giacomo ("the blend of James"). When he survived the removal of a non-cancerous brain tumor in...

I asked the winemaker directly since Vin Santo traditionally is not dried while on the vine (to avoid noble rot as found in the German “Trockenbeerenauslese” for example) and received this response:

the grapes were dried on the vine by cutting the cordon, which is not how authentic vin santo is produced. also there was no botrytis, so this wine has nothing whatsoever in common with a trockenbeerenauslese. at pressing the yield was ~90 gallons per ton, the juice was barrel fermented (in ‘larger’ format 225 liter - 50% new french oak, 50% neutral) without the addition of cultured yeast and left partial for a few years, after which all the new oak was removed and the various barrels of were topped. the lots had an average age of ~8 years prior to bottling ~10 years ago.

I am very curious about the result, how concentrated it will be.
I have no doubts it will be delicious, but I would be surprised if it would be as syrupy/concentrated as some Vin Santos that yield only 5-6 liter finished Vin Santo from a 40 liter barrel (that has not been topped).

I can speak to the winery–I’ve never had a bad bottle of anything from Uvaggio. Their Barbera is the best I’ve ever had in the $10-15 price range, and I am a pretty big fan of their Vermentino is solid. Never tried their dessert wines, though; this is one that the loss of the free shipping is preventing me from impulse buying. Still, if something pops up on one of the other .offs I want…

Hmmmz - winery established 1997, but the bottling comes from grapes 1990 through 1994? Or typo?
What happened in the magic years inbetween? very confusing. so another winery started the winemaking process?

The winery description says that Uvaggio was formed when two already experienced winemakers started the winery in 97. So if I had to hazard a guess I’d say it was a project one or both of them had started beforehand. Most wineries aren’t just started, the people involved are working on wine before so they have something to sell in the first couple years (and often as pet projects that get bottled much later)…

Been drinking 2002 Uvaggio (L’Uvaggio di Giacomo) Nebbiolo il Leopardo.
Some of the best $13 bottles I own, but running low.
Klez I picked this up if you want some.

I found this text hinting to a restaurant price of $45 and thus a purchase / retail price of less than $20.
http://www.thekitchenrestaurant.com/menus/kitchen_february_wine.html

So considering that distribution rates are around 70% of retail, you assume that a standard restaurant markup is around 300%?

That’s their current order form. It’s linked to their site.

So considering that distribution rates are around 70% of retail, you assume that a standard restaurant markup is around 300%?

Yes, I have seen that in a LOT of restaurants actually. There are exceptions of course.

Yes, I have seen that in a LOT of restaurants actually.

Crazy. The standard of most of the ones I’ve seen is around 150-175%. Maybe I just know more honest restauranteurs?

Crazy. The standard of most of the ones I’ve seen is around 150-175%. Maybe I just know more honest restauranteurs?

Nice job WD and crew. I have enjoyed all the uvaggio wines I’ve had. Still drinking through some 2002 Rose that is quite good. Don’t have any doubts about this one, sounds very interesting.

Ok, I jumped on it and ordered 3.
Reasoning: It is not easy to find a crafted dessert wine from grapes from 1990-1994 at this time, and it is a unique style (for the US). - worst case I have a novelty item to gift. Nice touch for a 21st birthday: “You were in the making when some of this wine was grown.”

sorry I missed this one…