“Chrome face” That tells me the rest of the shower head is all plastic.

That YouTube video alone tells me not to buy one. If the video designed to sell me the product is complete crap, the product they’re pushing can’t be far behind.

Bought one of these last time and very disappointed. Cheap plastic…

Bought one of these last time and very disappointed. Cheap plastic…

but honestly…METAL in the shower is just begging for corrosion and hard water stains. Plastic, while not as cool sounding when you plink it with your finger tip, is certainly more hygienic to me in this setup.

We have the Ultra-Luxury 3-way (cuz that’s how we roll) and it’s great.

I bought a lighter rendition of the 36-setting shower head. I think mine is like 24 settings? I’ve had it for almost 2 years, and have now brought it with me to a second apartment.

The unit is mostly plastic, but like someone said above, it means there’s no corrosion and it also seems like there’s a lot less mineral build up than on other shower heads (I haven’t seen any on mine).

The kit it came with included a number of parts to let you customize the output/flow, and included teflon tape to prevent leaks, along with rubber gaskets.

Anybody know if the restrictor can be removed on these units?

I’m confused, the last photo shows 2 shower heads, one fixed head and one hand held head. Can someone confirm if this is for both or just the 7" chrome face head?

I’m confused, the last photo shows 2 shower heads, one fixed head and one hand held head. Can someone confirm if this is for both or just the 7" chrome face head?

The last image for the DreamSpa? Wave 1408 7" Rainfall Wave-design Shower with 12" Height/Angle Adjustable Extension Arm is actually not supposed to be there. It is a copy of the 2nd image for the Aquagenix? Razor High-Fashion 8? Slimline Design 3-way Rainfall Combo 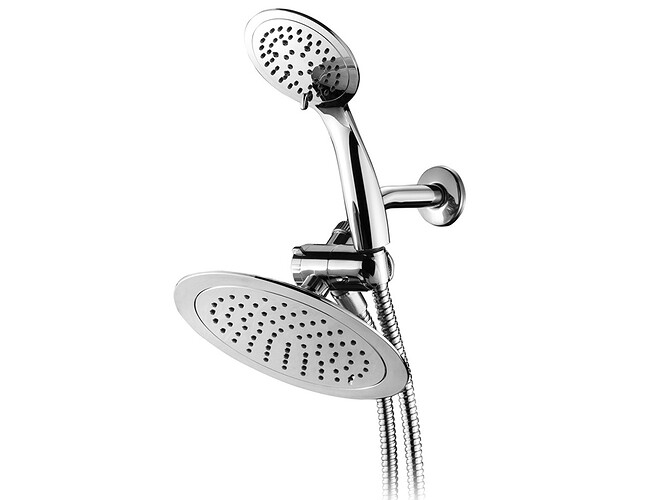 I have purchased a couple of these. The ones with the handheld extensions and multiple spray settings have been great. The adjustable “rain” shower heads were terrible. The adjusters broke when you tried to tighten them (and I don’t mean I tried to overtighen them) and when it filled with water it would sag under its own weight. Certain models are okay, but the brand name “Ultra Luxury” is quite a stretch.

what finish is this in

what finish is this in

Which one are you referring to? I think they should all have the finish in their features and/or specs page.

The last image for the DreamSpa? Wave 1408 7" Rainfall Wave-design Shower with 12" Height/Angle Adjustable Extension Arm is actually not supposed to be there. It is a copy of the 2nd image for the Aquagenix? Razor High-Fashion 8? Slimline Design 3-way Rainfall Combo

Yeah, I checked in with the set up guy & our buyer, still haven’t heard back- hoping they clarify soon.

EDIT: the last picture is indeed incorrect, we have removed it from the sale.

Robert R. Here representing the Manufacturer. Below is an interesting read relative to metal vs. ABS plastics. Most shower heads on the market are chrome plated ABS Plastic and hope that the below will help with some of the concerns posted about quality and reliability. Our products are of high quality and supported with warranties that replace any broken part for each product.

I thought my shower is Metal, but its Plastic!

Plastic vs. Metal
Metal (brass or stainless steel) is widely used in manufacturing of permanent-mount bath fixtures, such as faucets and towel racks. However, when it comes to showers, ABS Plastic is the undisputed material of choice for world’s top shower manufactures.With the exception of few simple fixed-mount models, practically all shower heads on the market today are made from chrome-plated ABS plastic, not brass. There are several reasons why:

The truth is, a high-quality ABS shower will last for years. It will be as reliable as those made from brass years ago, only more user-friendly, with better features and far less expensive.

Anybody know if the restrictor can be removed on these units?

Yes The Restrictor can be removed

Yes The Restrictor can be removed

Thanks! When you live where water is plentiful (say, Louisiana well water), a restrictor doesn’t make much sense, just makes you mad!

I bought one of the rainfall showerheads on an extenstion.
There is not one metal component on this item.
You must use extreme caution attaching this item to a steel shower fitting, as the abs threads are soft and can be cross threaded easily.
the instructions say to assemble the unit completely and then attach it to the shower, doing it over again, I would definitely install the connector to the shower fitting first, as engaging these threads is much easier than trying to spin the whole unit on straight.