Am I the only one who thinks that doesn’t look appetizing?? Who picked that picture??? Not blaming Woot! just FYI, I am blaming the org seller!

Looks like a GSW and doctor just opened you up to get the bullet out. 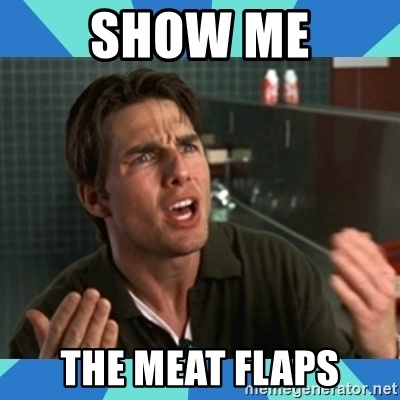 I’d rather have a chicken dinner!!!

omg that is terrible! LOL

anyways… FLAP meat just sounds unappealing to pretty much everyone…

Actually, that sound and looks AMAZING. If you don’t know what flap meat is, and/or you think that photo isn’t appetizing then you clearly don’t know much about beef beyond what you buy at your local grocery store.

Skirt is my FAVORITE cut, and the marbling in that photo looks phenomenal! If it weren’t $50 a lb, I’d be all over that shit! (And that shit would be all over a bed of coals for about 2 min per side, immediately wrapped in foil, and let sit for about 15 min to carry over and rest. When you peal open that foil, you’re greeted with the most TENDER, juicy piece of medium rare beef with just a hint of a char on the outside. Cut into thin strips on the bias, pour the juices over it and I guarantee you will never get more compliments from guests who will swear that they’ve never had steak so good in their entire lives!

Just what the check is “flap” meat? What part of the cow does “flap” come from? In all the 35 years my Father worked for a supermarket chain, I NEVER heard him utter the word “flap” when discussing beef.

Here in the southwestern part of the US, everyone knows what flap meat is, as that is a very popular cut. It is what is used for fajitas, for instance. And lots of other southwestern style dishes. It is superb marinated and grilled.

The last time I bought a fresh product on here it took so long to arrive it was spoiled, never again Woot!

So it’s the traditionally cheap meat they used to give to the caballeros as payment, but when white folks started liking it, it got real expensive. Got it. Snark aside, is there a difference between flap meat and skirt steak?

Just need to point out this is NSFW, and I work from home.

I didn’t think that one right away. My first thought was this.

Working in a supermarket, I’m guessing he never uttered the word “tri-tip” either. Unless it was was out west or Florida. I have to special order tri-tip from the local butcher here in the southeast. Our Costco had tri-tip when they first opened and then they realized they weren’t in California.

Point being supermarkets only deal in popular cuts of meat and what’s popular can be highly localized.

Speaking of Costco ours regularly has flap meat (non Waygu) and it grinds up into some of the best burgers.

Seems like a lot of money for a cut that’s often just ground up for hamburger or sausage.
Then again, like other’s here, it’s not something I’d buy regularly so perhaps the pricing is on point?

Here’s what one article says on this cut:
" Flap steak*, or flap meat (IMPS/NAMP 1185A, UNECE 2203) is a low-end beef steak cut. It comes from a bottom sirloin butt cut of beef, and is generally a very thin steak . Flap steak is sometimes called sirloin tips in New England, but is typically ground for hamburger or sausage meat , elsewhere."

So again, it sounds like a low-quality cut of meat that is best left for grinding or marinading. Nothing wrong with that as it can still be delirious. But I can’t imagine paying $20 a pound for something I have to soak in marinade just so it taste decent. I can do that with beef that cost under $4 a pound (or buy ground hamburger for under $3…)