Sure, I like scary movies…just about as much as eating glass, shaving with my lawn mower, sitting in a room full of venomous snakes, and swan diving into a pool of razors!

That sounds like it would make for a good plot for a Saw movie.

I wouldn’t gloat.
First one who goes into the spooky house/cabin/cave/abandoned ship/monkey poll always meets a grisly demise by the psycho killer/evil demon/ghastly monster lurking in the shadows!

Unless, you include the scene-setting backstory from X-years earlier, which causes the legend in the first place…

Speaking of gloating… Without sacrifice in these stories there is no plot. 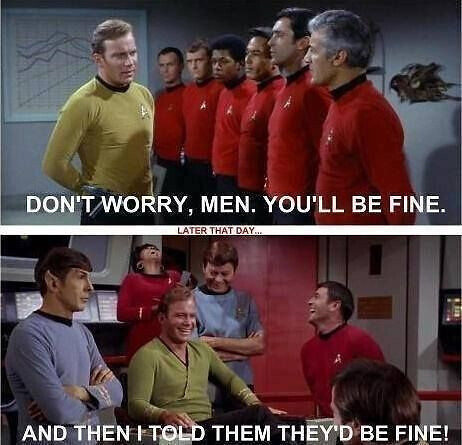 Noooooooo!!! No horror movies, No haunted houses, and please don’t sneak up behind me to startle me!!! I am not a fan of a sudden heart attack!!

Love smart or creative ones. Not much of a fan of the gross out type ones at all.

I spent 30 years as an Army officer, I’ve seen enough horror in my lifetime I don’t need to pay for it

I’m a big fan of the Final Destination series. I like the ones that make you think a little. Saw was, of course, so original for its time. I really appreciate an M. Night Shyamalan (sp) style twist. Except for The Village, which was annoying to me. The Sixth Sense though…amazing. It had been spoiled for me ans STILL was so amazing.

The Thing is my favorite movie, full stop.

No, I don’t like horror movies. I didn’t vote because none of them apply…I’m not scared of them, they just don’t interest me.

I normally don’t like them, but I’ll watch the old, corny ones (Vincent Price, Lon Chaney, etc.) at Halloween. They add to the ambiance!

I was about to say the same thing. This poll was phrased in a hard-panned manner like the 2020 election. Can’t I just be not excited about putting on a horror flick and prefer a mindless, slap-stick comedy instead?

That out of the say, “Shaun of the Dead” is perhaps the perfect movie which summarizes my interests.

" Let’s go hide in the barn behind the chainsaws"

Best time is yelling at them or drinking games.